Pink shirts and an elephant in the room

It's not often that I agree with Province columnist Jon Ferry, but his piece in yesterday's paper raised some interesting points about the annual "Pink Shirt Day", the day to show solidarity in the "war on bullying".

But the fact is, for all the years of anti-bullying messages -- pink shirts, poignant posters by elementary school kids, songs, plays and YouTube videos -- the situation keeps getting worse. People's lives are still being ruined -- both through traditional playground bullying and lintbrains on the (anti-)social network in this Age of Nasty -- and some children actually commit suicide, hoping to escape it. Maybe the approach needs to be re-thought.

One question I don't hear being addressed is, Why do bullies bully? I was on the receiving end of a fair bit of bullying when I was growing up, but I also bullied back and I believed I was absolutely justified in doing so. I won't go into a litany of excuses, mitigating reasons or extenuating circumstances: the fact is, I could be one mean sonofabitch and only realized what I'd done after I'd grown up and reflected on it.

If I "had my reasons" for bullying, so do others, and they're probably not aware of what they're doing, either. If we're serious about "stopping bullying", the bully's point of view needs to be considered.

That is, unless we don't want to admit that maybe there's a bit of a bully in all of us.

(I would also recommend a column by Stephen Quinn in the Globe and Mail from November, in which he discusses "the Culture of Mean" and the fact that meanness is all around us and children learn what's in their environment. I hope he's kidding when he suggests that "culture of mean" only applies to American talk radio. Canadian talk radio is only slightly better in that regard.

Right around the same time as Stephen's column and the summit he refers to, a billboard turned up from shoemaker John Fluevog. It showed a pair of purple suede high-heeled boots, and the caption, "No, you're weird!" I don't know if John intended this, but it came across as an excellent anti-bullying message: the perfect comeback for someone who gets razzed for the kind of clothes he or she wears -- pink shirt, purple boots, whatever. It was something my mother would have counselled me to say in response to similar ribbing from my peers -- and as a child, I did tend to dress, well, individualistically. I'm still trying to buy up all the negatives. But I digress ...)

Back to Jon's column. A point that really stood out for me was the observation by a school psychologist from New York, who said that the current obsession with bullying creates a victim mentality. While he didn't say it in so many words, the victim mentality provides excuses for one's own wrong behaviour (see "bullied back," above) and promotes weakness in the face of adversity. Once a child grows up and no longer has anyone's skirts to hide behind, won't he or she become a sitting duck for the bullies who have graduated to the business world and brought a subtler, more grown-up form of bullying into the workplace?

Worse, will they not be quick to pull the trigger and claim that others are bullying them when they run into a disagreement? Perhaps those others are simply being strong and forceful with their opinions or actions, but they could become stigmatized because of the accusations.

But the elephant in the room here is that there is a solution to bullying that I don't hear talked-about in the mainstream, and that is love and forgiveness. Love as a response to hate is not preached in the secular world, yet that is exactly what Jesus calls us to do. But God is Love, as the Apostle John writes, and God, sadly, was told to leave the public school system more than 40 years ago.

So, how well has that worked for us?

Maybe it's time to revisit that politically-incorrect approach. "Do not be overcome with evil," the Apostle Paul writes (Romans 12:20), "but overcome evil with good." And Peter cautions against "returning evil for evil or reviling for reviling, but on the contrary blessing, knowing that you were called to this, that you may inherit a blessing." (1 Peter 3:9)

(Are there other "religious" philosophies with similar views? Do they involve reaching out to our tormentors in love and calling God's blessing on them, as Jesus' approach does, or simply looking inward to calm our own souls? That's a major point, and I'd suggest that the latter approach simply causes the bullying to intensify and sooner or later, one is bound to crack.)

After all, Jesus' sacrifice on the Cross was about overcoming, not remaining victims. We are supposed to overcome our own adversity and then help others overcome theirs. We are called to minister to victims, not become one ourselves. As Jesus says, "if the blind leads the blind, they both will fall into a ditch." (Matt. 15:14)

In the book of Revelation, we get an idea of what God has in store for overcomers:
I haven't seen any indication that victims get the same promises as overcomers. Overcomers are victims who have stopped blaming circumstances and/or other people and have chosen to forgive and move ahead in Christ. "If you will not forgive others," Jesus says, "how can My Father in Heaven forgive you?"

Forgiving bullies and loving them is the most effective way to defuse bullying. Turning oneself into a victim gives the bullies more power than they deserve -- and all the power they want. Forgiving them releases God into the situation and He resolves things to His satisfaction -- which means the bullies are brought to repentance.

Which would you prefer: a pink T-shirt or white raiment?
Posted by Drew at 7:53 AM 1 comment: Links to this post

Today's Province contained a small obituary today: John Zwolak, aged 68. To the Victoria radio community, he was Johnny Zee, one of those behind-the-scenes guys who make a radio station work. There are personalities who may be the spirit of a station, but Johnny was one of those fellows who was the heartbeat and muscle of the operation.

I worked with Johnny during all my years at C-FAX -- 1988-2001. He did the occasional on-air turn, but most of his work during the time I knew him was in the production studio, producing and voicing commercials and public service announcements.

He was a great guy: good to be around, and a good example of a professional in the craft. But when I think of him, two incidents stand out. Oddly enough, both happened before I got to C-FAX.

Grey Cup time was particularly notable around C-FAX because the sports director, Ken Dobson, would go to the game, and generally take Johnny with him to do their own brand of "coverage", which sportswriter Jim Taylor described as "some of the zaniest hours in radio". That description -- and the following story -- come from my book, My Shattered Nerves! A Souvenir Program of The Dobber.*

[Ken Dobson narrating] When I first came to Victoria, one of the first C-FAX employees I met was Johnny Zee -- Johnny Zwolak. He is an expert producer,especially when it comes to editing tape. I've met some of the best across the country, and Johnny ranks right there with them. I swear, if Jose Carreras or Pavarotti ever sang a sour note, Johnny could edit that one note out and splice in a good one -- that's how adept I think Johnny is.

We've had our fun times. When we did our first Grey Cup broadcast -- not play-by-play, but a special talk show from Montreal -- Terry Spence was supposed to go, but he couldn't make it,so they took a l-o-o-o-n-g chance on one Ken "Dobber" Dobson. The uestion was, was it safe to send both Dobson and Zee, both well-known imbibers of Labatt Blue and Kokanee, to Montreal? Worse, we were to broadcast from my favourite watering-hole, the original Irish pub, The Hunter's Horn on Peel Street, owned by my good friend, Martin Conroy.

We arrived in Montreal on a Thursday night to get ready for our broadcast fromthe Hunter's Horn on the Friday. We had lined up as our guests Jean Beliveau -- we had thought -- Jim Fanning, then manager of the Montreal Expos, and Danny Gallivan.

Apart from our two-hour broadcast, we had fifteen "cut-ins" that we had to do, talking with people from all over town. Well, in one particular case, Johnny suggested that, even though we were recording them all inthe Hunter's Horn, we should say we're at the Queen Elizabeth Hotel, to make it seem like we're not always at this tavern. So I did that: I said, "This is Ken Dobson with Johnny Zee at the Queen Elizabeth Hotel." 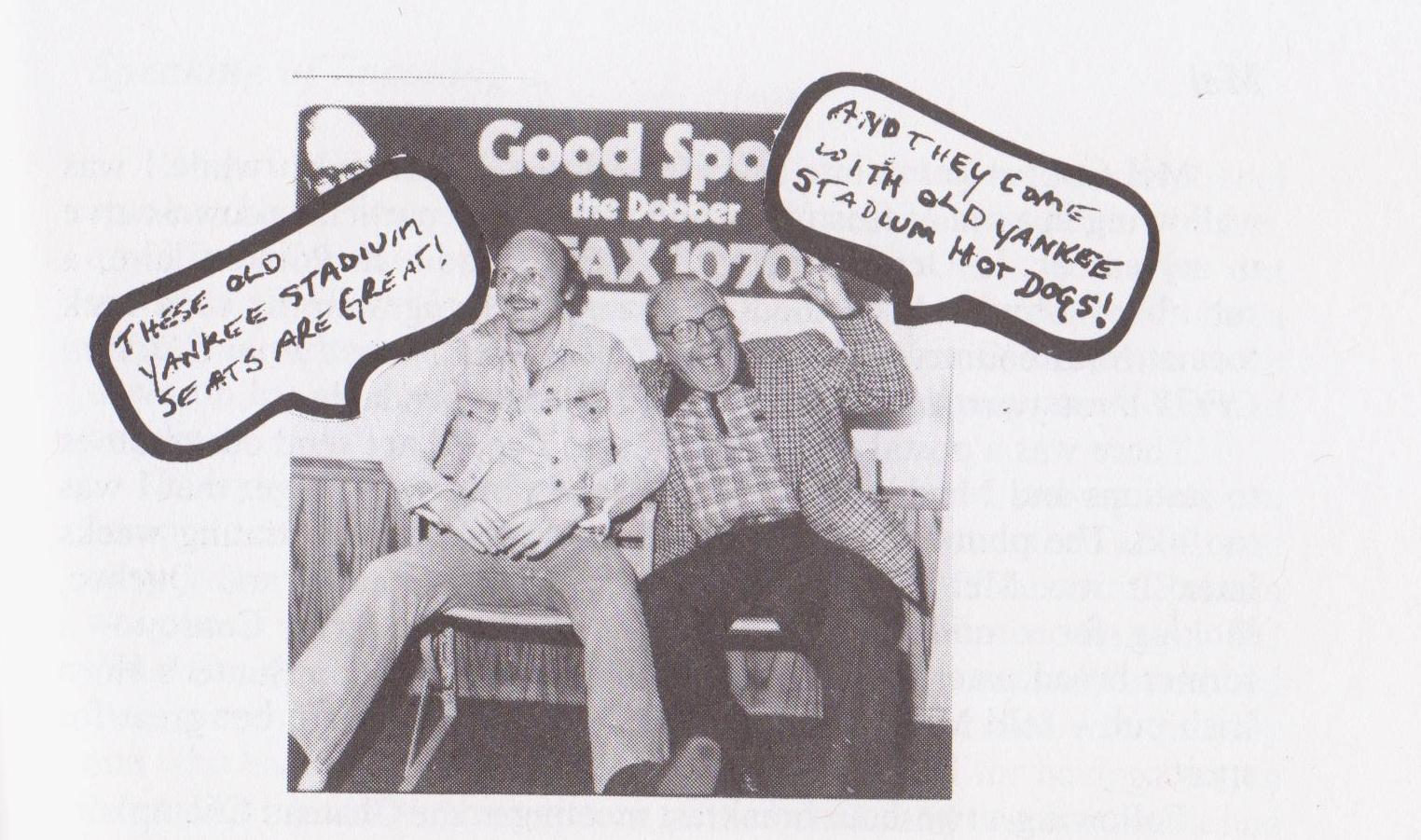 Here's a photo of Johnny with Ken Dobson in another sports-related incident: Dobber was a big baseball fan and for Opening Day 1977, C-FAX station owner Mel Cooper promised Dobber to get him two Yankee Stadium seats for opening day. Dobber thought it was a cruel joke, but indeed, Mel came through. He never actually said they would be seats at Yankee Stadium: he had gone out and bought two of the old seats that were taken out when The House That Ruth Built was renovated and presented them to Ken -- on air.

But those two stories are more about Johnny with someone else: the big story I remember of Johnny Zee was his, and his alone. He pulled a Sunday morning shift in May, 1980. In between records, he gave a shout-out to a local black-powder club. In case you're not familiar with them, these are gun enthusiasts who specialize in old-style, load-through-the-muzzle, pour-in-the-gunpowder and tamp it down with the ramrod kind of shooting. They tend to be a rowdy bunch, dressing up in Daniel Boone-style buckskins and coonskin caps.

So Johnny was doing the shout-out when he heard several loud reports -- loud enough to be heard through the studio window and picked up by the on-air mic. He said, "wow ... sounds like they're getting started early!"

Except it wasn't the black-powder club that made the noises. The noises came from Mount St Helen's, some 300 miles away, blowing up.

It's always tough to say goodbye to a friend and colleague. I hope Johnny knew how much he was appreciated by those who worked with him -- and how much he'll be missed.

===
My Shattered Nerves! was a "non-biography" of Ken Dobson that was written when we knew he was dying of cancer. It's a collection of anecdotes both by and about him, which sold fairly well in Victoria, where he had a lot of fans. The experience also taught me the meaning of that dreadful word, "remaindered" -- the term given to books that a bookstore hasn't been able to sell and sends back to the publisher -- in this case, me. If you're interested in getting a copy, there are a few available on Amazon.

Posted by Drew at 12:02 PM No comments: Links to this post

Drew
Vancouver, BC, Canada
I'm an evangelist and recovering broadcaster (I never met a microphone I didn't like!), who looks at the world, as much as possible, through the filter of the Word of God. This doesn't mean judging others: it means encouraging people to focus on Jesus and our relationship with God -- which is eternal -- rather than the things of the world -- which are not.